Sufjan Steven – The Age of Adz 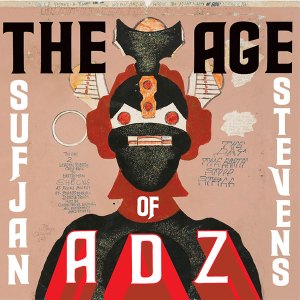 When I first heard this album it came as a little bit of a shock when the second track ‘Too Much’ started. However, after about a minute into it I suddenly started to enjoy it. It was if I started understanding what he was trying to do. And I really liked it. Admittedly some of the songs maybe are a bit too much, but every song has at least parts to it that make me smile.

This just sounds like it’s the previous Stevens music with a more electric effect added on top of it. Indeed at first listen it may seem like it’s completely different and it’s all changed but Sufjan is still there, and really it’s not all as complex as it might seem. I think that if you give it some time then this record will definitely grow on you (if you’re a Sufjan Stevens fan that is, and maybe if you aren’t). With this album Sufjan is moving onwards, quite a lot, but it’s still got the good ole’ Sufjan sound along with it. Stevens has just got a lot bigger, and even more theatrical with this new album.

I actually found myself surprised for a second time at one point about half way through the last track, ‘Impossible Soul’ when the autotune is added to his voice. This really caught me out more than any of the other stuff for some reason. Maybe it’s because everyone despises the use of it and so do I, but only when you’re trying to hide it. Anyway it did get me smiling, yet again, and that’s one thing I love about this music. In fact, I think that I would put the last track down as one of my favourites from the album even though it could be classed as a few tracks.

Before I’d heard anything about or from the album I was kind of hoping for something similar to ‘Illinois’, and I imagine a lot of other people were too. But in the end I was surprised, but pleasantly surprised, to find something new and unique to his work. This really is a great album and I even managed to get through the whole album without my mind wandering (within reason) which rarely happens to me with a whole album, especially one that’s over an hour.

While this may not hold up to ‘Illinois’ it’s definitely a move in a good direction for Sufjan Stevens and is something that makes me look forward to what he’s going to think of next.

3 thoughts on “Sufjan Steven – The Age of Adz”