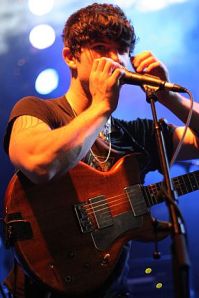 First off, I’d just like to say that I really did have a good time at this gig, partly due to the fact I was with friends I hadn’t seen for a while and partly because I like the bands music. In terms of this review I hope you read it in this light, so whatever I say is purely going to be on performance quality and of course there’s going to be a bit of bias due to my appreciation of the bands on show already.

The show started with Trophy wife, a three piece of vocals/guitar player, a synth player and a drummer. One of the greatest bits about this band was their drummer. Although not entirely conventional, with no bass drum that I could see (instead this was replaced by pads) he was the most entertaining to watch, and seemed to really get into the music. The singer was a little weak but apparently it was only their ninth gig and this wasn’t helped by a poor sound guy. So poor in fact that at one point there was obvious feedback.

Crystal Fighters were very good. Their music may not be to everyone’s taste but in terms of enjoying music at a gig they were great to watch and got a good vibe out of the audience. However, the first of their band did come on topless. Fortunately there was little moshing except for on the last song, which leads me to my main criticism of, not Foals themselves, but their audience.

It seemed like that as soon as Yannis (the lead singer/songwriter from Foals) walked onto the stage the audience just started moshing, and this seemed to continue until the very end of the gig, with a very slight pause for a couple of songs. While I do enjoy a good mosh, this did seem a little inappropriate for the sort of music that was being played, and I felt it took away from the overall appreciation of the band and did get quite tiring (and painful) after a couple of songs. While this was going on Yannis was jumping round the stage, onto beams and speakers alike which made it entertaining. In terms of music quality they were very tight and knew what they were doing all the time. One of the highlights for me was the fact that they started with ‘Blue Blood’ (which I was expecting) and also their final song ‘Two Steps Twice’ went down a blast. They really do know how to play gigs, and I can’t really fault their playing, or performance much, although I was their mainly to enjoy myself. This is just a sideline to help people decide whether it’s worth the money, and/or trip, and it definitely is, although probably only for indiekids (which the place was teeming with, unsurprisingly) and real fans of the band.