4 years. Wow. I can’t quite believe it’s been that long. I have a friend who said to me once when you’ve broken up with your girlfriend, if you get back together again it’s not going to work. That’s almost how I feel about this blog. So much music has been released since my last post (an undefinable number of songs) and I’ve lost touch. William Fitzsimmons’ After Afterall is playing but really it’s Bon Iver that has brought me back, due to the release of their latest album 22, A Million. As the songs drifted over me it took me way back to my review of The Age of Adz and the feeling I got when listening to it. I think part of it is the shift from the norm, a use of unfamiliar sounds. But also a connection to the past. Throughout the album are snippets of their previous work, like the use of the metronome sound in 666 ʇ which is from the incredible 4AD/Jagjaguwar Session.

This will hopefully be a successful revival. I really have missed the music scene and my musical tastes are suffering for it. Looking through the old blogs I used to follow most of them seemed to have stopped (much like mine did). I’m going to see this as a good thing, and a way of giving me a chance to discover new people with new perspectives. After all, there is a world of new music for me to discover, and I hope you care to follow along, it should be an interesting journey. 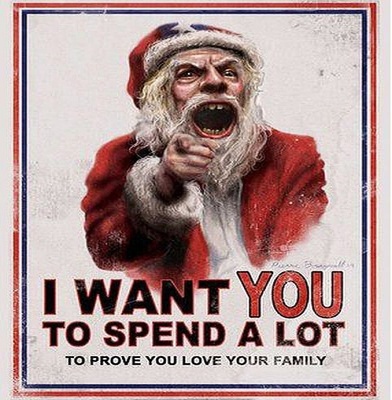 I’ll admit it, I was a bit moody the last time I wrote about christmas but do not fear for I am in a greatly improved mood! The weather has somewhat improved* and I’ve been listening to Christmas with Nat & Dean (that’s Nat King Cole and Dean Martin) but I think that’s about as musical as this post is going to get I’m afraid. I know, I know, it’s a music blog and should be all about music, but I feel so saturated with christmas music I just can’t let it go on anymore.

Well perhaps just once more as this’ll be my penultimate post about christmas. There’s only 8 days left and I seem to be running out of legitimate content although I do have one more musical christmas treat up my sleeve which I’ll leave for next time.

Isn’t this picture bloody creepy? I’ve not put it there for the ‘message’ so much as the scary looking American Father Christmas. Saying that though christmas does seem to cost a lot, you can ask my bank account.

*Although this may not be inherent of christmas, as I do actually like the weather cold at this time of the year. Hopefully It’ll snow soon (but only on christmas eve, when I get back home.).

It’s a sad day for everyone due to the news at the death of Sir Patrick Moore. Nevertheless, the blog must go on, and hopefully another free album will cheer you up! But I’m not sure it will. This time it’s the XO for the Holidays Volume V. I have to say, I’m not that impressed with it this year. Yes it’s still got the magical cheer and for those less into the christmas cheers some more depressing numbers, but I feel that the quality of alternative christmas songs is heading downhill. Could I be wrong? Perhaps it’s just that all christmas songs are eventually doomed, just because of their content? I know that there are plenty of good christmas songs out there, such as those from Mogwai, Eels and Frightened Rabbit. These, however, are very rare, and maybe that’s for the best.

We wouldn’t want too many good christmas songs now would we, that would be going against christmas itself! That’s what it’s all about isn’t it, bad songs, too much alcohol and happy people. Bah humbug.* Also you may have noticed the snow pouring down the page, I’m not sure if I like them, and think they’re just a bit annoying. I’m probably going to get rid of it, what do you think?

*I’m not actually this moody about christmas, at the time, I do like the overly cheery songs and all the tackiness that comes with it!

Apparently the christmas music I’m into is too moody. Well, I definitely think the ‘alternative’ christmas music that I enjoy is a lot better and musically is probably more valid than this. So, due to me not being happy enough (IT’S CHRISTMASS!) I’m going to be posting some more cheerful music! There’s always some of Sufjan Steven’s annual christmas songs to choose from, and I’ve also just downloaded the Paste Holiday Sampler 2012 which is available for free download below. Part of Sufjan’s christmas album is also available from here (and below).

Hopefully some of the music from these two albums will be a bit cheerier and stop you from committing suicide this christmas. Come on, it’s not that bad, it might even snow it’s that bloody cold.

I can tell it is, because there’s snow falling over my wordpress pages. And of course all the disgusting christmas songs that are blaring out in every shop. But I quite like them. I am very tempted into creating a list of christmas songs that I approve of (it seems the done thing in the blogosphere) but I shan’t be. A couple of songs a week should do nicely, as I imagine you’ll be getting flooded with them from every direction anyway.

I’ll start by telling you  my favourite christmas song of all, and my favourite in all its different versions, from the original composed by  Mykola Leontovych through to this one, via the Home Alone version. although this one is my favourite. I first found it last year when downloading the XO for the Holidays Volume 3. They’re not bad compilations, but not all the songs are great. You can download all the samplers (there are five of them now) for free! Hurrah, free stuff!

Paper Tongues – Carol of the Bells

…when I opened iTunes and it was almost entirely

different! Now on the whole I’m not adverse to change, but this did take me by surprise. For about 15 minutes I was resistant to the idea and was getting angry at the fact I couldn’t find any of my playlists easily, and also that the entire page was covered in blank album arts (because a lot of my album arts have gone missing in the many years I’ve been acquiring my collection of music). Also one of my flat mates said “it looks like Windows Media Player”, and I thought, yes, yes it does.

Alas, as I did a little bit of tweaking I became used to it and managed to get it looking more like a slick music player as opposed to something dark, bulky and slow. And I do like the new “Up Next” feature along with the so called universal search, looking through podcasts, playlists as well as the songs. Also the search is exceptionally quick, which is a lovely change because in iTunes 10 it would take about 10 seconds to come up with any search results even though I may sound some what hypocritical with regards to my media player statement (the slowness is mainly due to having all my music on an external hard drive though).

So, in conclusion, change can be good, but only when I’m prepared for it.

Huzzah, I’ve finally got round to making a dedicated twitter for Acquired Taste! Check it out! @EquiredTaste

I’ll apologise first, for just disappearing, it wasn’t entirely intended, I just found that time to do it became less and less and also my urge to write diminished quite a lot, and why that happened, I don’t really know. However, do not fear, for I’m back, for good, and shall start bringing you reviews and nonsense, and probably more of the latter, to help you procrastinate, learn or be entertained!

Unfortunately I’m going to be taking a four day break from the blogosphere because I’m going to be parted from my dear computer! But do not fear, for upon my return I will have a review of Foals playing at Southampton Guildhall (who are playing there this Sunday (7th) and whom I’m going to be watching). Supporting them are Crystal Fighters, who I quite like and look forward to seeing live. Hopefully I won’t get too drunk so as I forget everything I’ve seen. Wish me luck!